Mohan Siroya: My long journey in film journalism has been full of thrills and challenges 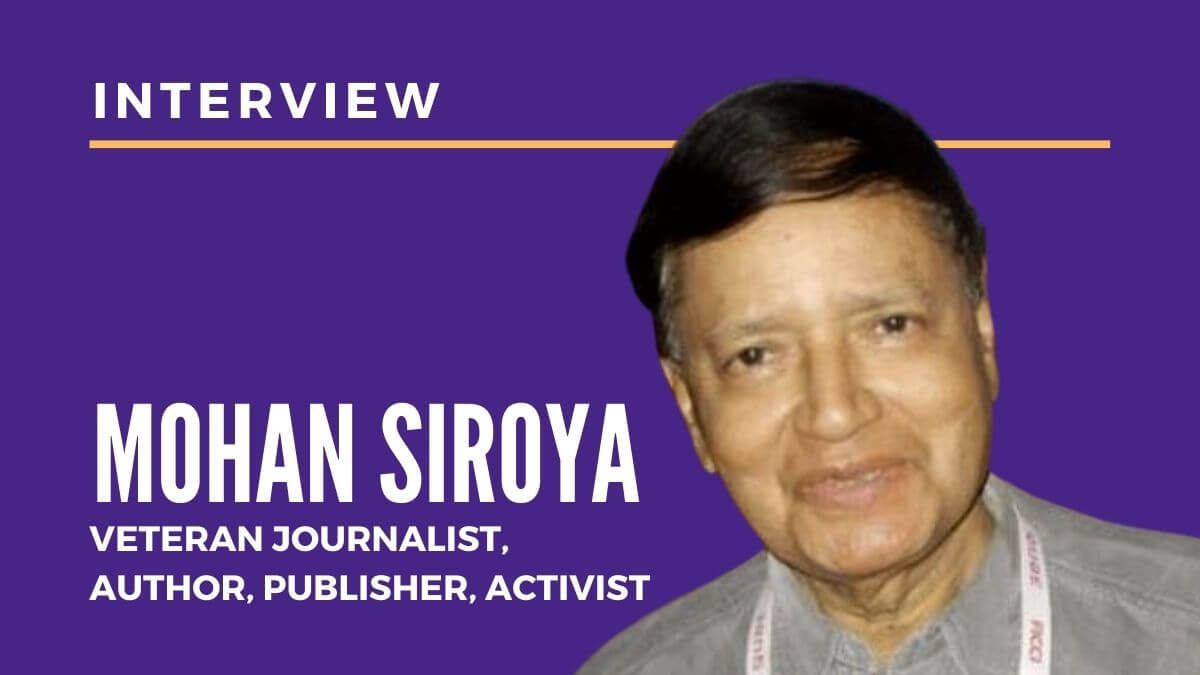 You have spent the longest time freelancing in film journalism? Tell us a bit about how and when you began and how your journey has been?

Ya, for the last 62 years, I have been the initiator for stars and celebrities. For a change now, you (with this interview) have become an initiator for me. My long journey as a freelancer in Bollywood has been full of thrills and challenges. Right from the age of nine, I became enamoured with black and white movies, especially the stunt films of Nadia, John Cavas and Homi Wadia, Bhagwan and Baburao Pehelwan, or the devotional and social feasts offered by S.Fettelal, Nanabhai Bhatt or V.Shantaram and Bombay Talkies.

So much so that I used to go to the cinema of my native place for an evening show, telling my parents that I am going to study at a friend’s place. I would watch half of the movie one day and the other half on the second day, as the entry-exit pass used to be the same. This fatal attraction towards movies, music and actors became a sort of addiction in my growing years.

I was in college at Nagpur and I used to watch the first show of a new film on Friday (Regal, Shree, Variety and Vasant Talkies used to be my regular jaunts there). In the summer vacations, I used to work as a learner for senior writers in Nav Bharat and Rekha Mag published from Gandhi Baug. In 1959, after my Master’s degree, I happened to see an invite issued by renowned social activist and reformer Dr. K.M. Munshi to join his movement against ‘Sex and Violence in Films’. 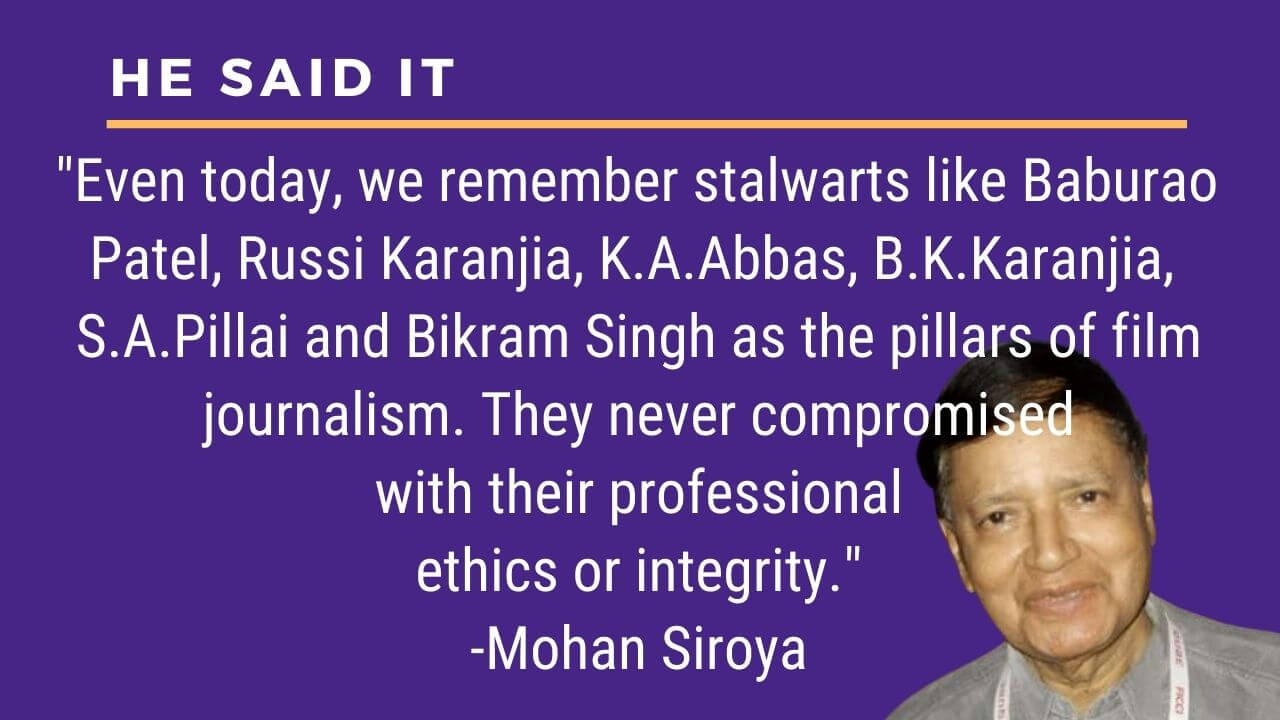 Mrs. K.M. Munshi personally encouraged me to contribute something on the subject. I submitted an essay article on that subject. It was immensely liked by her and she referred that for publication in the then Calcutta Cine weekly Cine Advance. It was published on the front page with a bold headline in December 1959. That hugely encouraged me and I started contributing on films as my hobby. This heralded a career in freelance journalism.

A natural question will arise, why as a freelancer and not a regular film journalist? The answer to this is simple — lack of moolah (monies) to keep the home fires burning. In fact, I had started as a full-time journalist in the then Indore paper Jagran at a salary of Rs 75. I was married and had a rented room, which was difficult to maintain on that salary.

Being a post-graduate, I was offered a post of an officer by a textile mill at Rs 300 a month. My head prevailed over my heart and I decided to be a full-time professional and also keep pursuing my passion of writing as a freelancer. By 2009, I had completed fifty years of film journalism.

By this time, I had amassed thousands of articles, published in almost all leading periodicals of India. It prompted me to author a collage of my selected published articles in a book form, which I titled Golden Sojourn In Bollywood Wonderland Vol. I. It got e-published in 2013 and is now available online.

Though summing up changes from those times to now in an answer is impossible, what are the main changes you have seen in film journalism over the years? In your opinion, has the media improved with the quantity of media outlets and reach, or has the quality of journalism deteriorated?

That’s a good question which calls for introspection. Yeah, it’s been a big change, which is also the universal rule of time. In my humble opinion, the media has changed, but not for the better. Of course, this can be debated as a subjective opinion. The more the media outreach expanded, the more the ethics and moral standards degraded. In our times and even today, I have regarded journalism as a mission to bring about a change in society for better values and dignity.

But today, a section of the media has fallen so low that some have begun terming journalists as Presstitutes. Moral and ethical degradation has reached a nadir. No doubt, a film journalist too is attracted to the glam and glamour of the stars and celebrities but that should not mean that he or she is carried away by that tinsel glitter and become corrupt.

We used to write with a thumb rule about never violating the privacy of an individual or group and not compromising on integrity. Even to produce gossip, I used to go near a star/celebrity locality and stand at a Tea/Pan stall where the domestics of the stars and celebrities used to visit, I used to hear stuff while standing in a corner. Same way, I would try to appear inconspicuous at film parties and overhear the whispers from behind. We  journalists wrote and criticised, but with conviction… never sold the ethics. 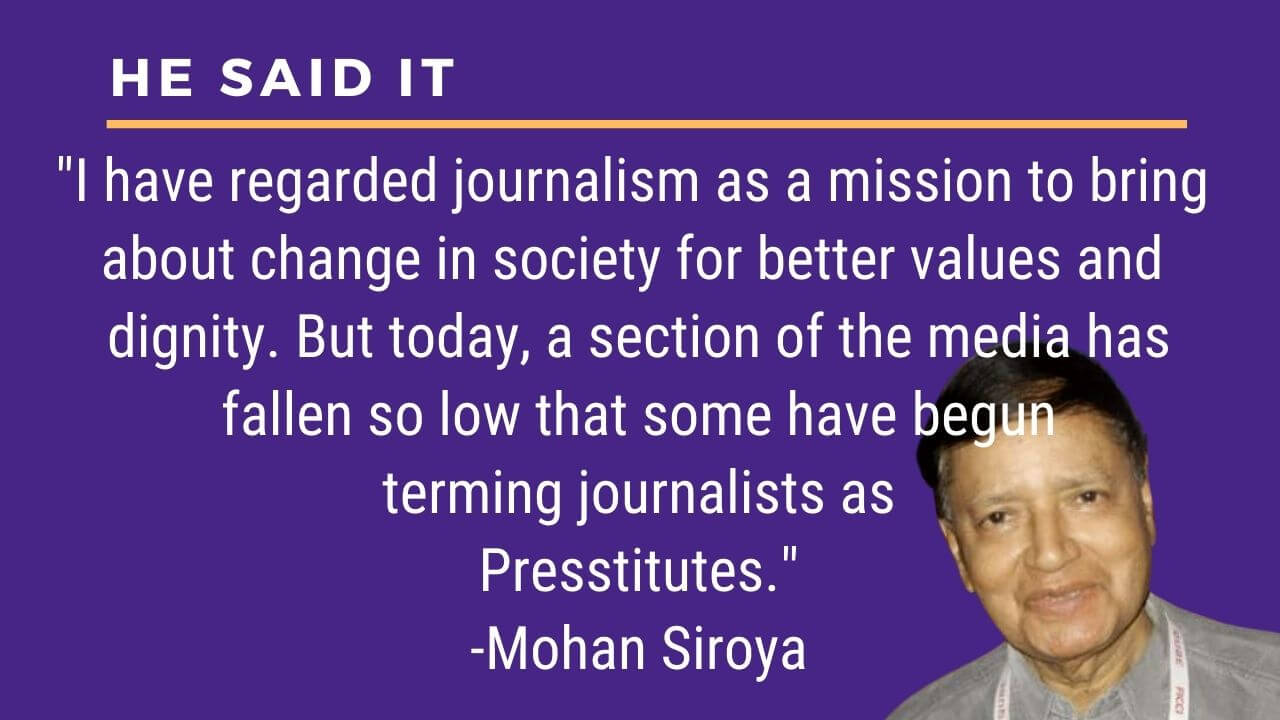 That is why even today, we remember stalwarts like Baburao Patel, Russi Karanjia, K.A. Abbas, B.K. Karanjia, S.A. Pillai and Bikram Singh as the pillars of film journalism. They never compromised with their professional ethics or integrity and called a spade a spade. God has stopped producing such species.

Yes, there was no presence of marketing bosses over the creative people then. I will cite an instance little known on record. In the year 1972, the film reviewer for India’s top daily The Times of India was Bikram Singh, a film critic of impeccable quality. During those days, B.R.Chopra used to be a very influential name in films. For his film Dastaan, Bikram Singh wrote a critical review.

In one particular sentence he wrote, that even if someone asks him to go and watch this movie on knife point, he will not. That created a storm in the film world. Producer bodies like IMPPA passed a resolution calling for the boycott of Bikram Singh from all press events, including press screenings. But the critic and the paper ToI remained unfazed and his film reviews continued every Sunday.

Journalists spoke in whispers that Bikram Singh used to visit the cinema houses every Friday and watched new movies at his cost and then wrote his reviews. He continued to practice this throughout his remaining career with ToI. I cannot imagine this happening in current times. Moreover, marketing bosses will not allow such things to be published in the first place, to keep the ad revenues unaffected.

You also founded the Freelance Film Journalists Combine (FFJC), an association of freelance journalists all over India. What were the objectives behind the formation?

When I established myself as a freelance journalist, I found that the movie industry or the periodicals used to pay less attention and importance to freelancers, compared to the regular staff press reporters. Besides, the remuneration for their writing used to be abysmal and sometimes remained unpaid. That was because freelancers were not united to fight for their rights and privileges. 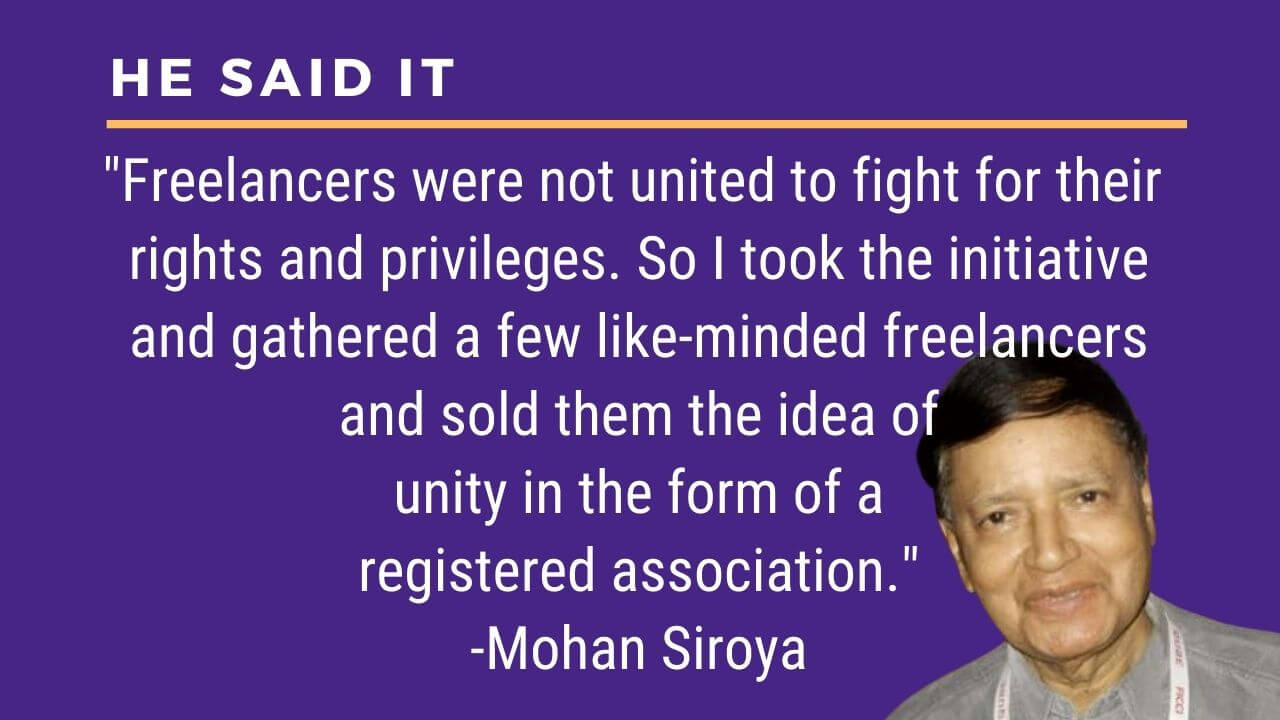 So I took the initiative and gathered a few like-minded freelancers and sold them the idea of unity in the form of a registered association. Soon a body of seven founders became a strong association of about forty.

We successfully fought a few battles of unpaid remuneration as well as establishing the equal privileges from film PROs for freelancers. On a few occasions, we had to even boycott movie events of a particular PRO. All that was part of the professional job. FFJC continued to be reckoned as an effective body with PRs and film/TV producers till 2000.

You were one of the first freelance journalists to begin a website of your own called Shadow Play India? What was the thought behind it?

Not just one of the first, but the first freelancer to start a website. Frankly, many factors were behind it. First and foremost was the dictatorial attitude called an ‘editorial privilege’ of the editor/publisher in denying to publish free and frank expressed views or criticism. Poor remuneration fee was another factor.

The alternative was to publish one’s own print periodical, but the venture was not cost-effective. Thus starting a portal was a more viable proposition. Also, content on the web had no restrictions of space and word limit of articles. So after a brief stint in print, the  Shadow Play portal was launched.

Apart from being a journalist for so many years, you have also been a consumer activist of repute and the chairperson of the NGO Consumer Complaints Cell. In a feature published on you, Times Group publications The Times of India and Navbharat Times even eulogized your selfless and free services by calling you a “City Angel”. Was it the need to contribute more and more to the fabric of society which made you venture into consumer activism?

It is a natural process for a social contributor to develop, evolve and experiment as per the needs and dynamics of the society fabric. The activist in me was always ready for unforeseen challenges… to fight for the awakening of consumers towards their rights in the fast-changing economy and developing market.

So when I was designated as the District Chairman – Consumer Guidance of Lions Clubs International, I floated an NGO called the Consumer Complaints Cell in 1989 and was made its founder Chairperson.

To my good fortune, I am lucky to retain that post till today. During this 33-year-long journey, I am proud to have had many achievements, in the field of Consumer Guidance, fighting for issues and rights, advocacy for causes and redressal of consumer grievances through mediation or appropriate legal guidance.

On phone and email, I continue to receive complaints even from NRIs abroad about their grievances, whether in public or private undertakings. Now there is a vast arena to be tackled for online transactions and frauds. I am fortunate that the media at large have appreciated the work I have been doing.

What, according to you, are the course corrections the media needs to make to be an ideal for society once again?
Well, I am too small a person to comment on dramatic changes. Perhaps, the very definition of ‘ideal’ is changing constantly. Besides, societal pressures, national interests too come into the picture. Since I have almost retired from active media life, I find it difficult to say what will be an ideal media for society. However, there is always a Satyamev Jayate. One has to be true to oneself.

Vivek Sharma: Content will eventually take over and stardom will reduce